No strong thoughts on if it should be 8% or any other number, overall, I am for compensation. Maybe it is this proposal or a different proposal, but I think we should compensate users. The main reason I’d want to compensate borrowers is because it is still in the early days of DeFi and anything that builds borrower trust in the long term is valuable for the protocol. If the extent of the oracle risks were not clear to the end users, then it is on us as a community to improve our communication around the risks.

Polychain has decided to vote “AGAINST” Compound Proposal #032.

While we sympathize with those who were affected by the dislocated DAI price and subsequent liquidations, we believe that CP #032 sets a potentially dangerous precedent for a few reasons:

We would like to see continued discussion and proposals that work towards improving oracle robustness, implementing insurance funds to provide a finite backstop for unexpected protocol behavior, and exploring alternative methods of reimbursement.

The community has come to a loose consensus that the current oracle system worked as designed, but not as expected. The actual market price of DAI on Coinbase was accurate at the time of liquidation. Regardless of the outcome for CP #032, it is very clear to us that the governing community must work to reduce market risk and improve oracle resilience.

We are voting “AGAINST” this particular proposal, but remain open-minded as it relates to potential reimbursement. We applaud the efforts of @kybx86 to solve these key issues, and we look forward to working with them and the rest of the community to reach a possible solution.

Does the protocol now use its own open oracle? It isn’t Coinbase “price discovery” solution?
The bug is in the Compound protocol or Coinbase open price feed?
Coinbase states that is a normal market activity (30% stablecoin spike in one hour on their exchange while globally was stable).
What is “bug” in this situation?

Pantera Capital is voting AGAINST Compound Governance Proposal 32 to distribute COMP to users affected by DAI liquidations on Nov 25 2020 as compensation.

Financial markets are more prone to hidden tail risks when participants deploy instruments with high leverage or for uses far from their intended purpose. Such risks are difficult to measure, which leads to scenarios where returns are attractive and too low at the same time.

As a Compound user (note: not farmer or private investor), we’re responsible for knowing the potential risks involved in using the protocol, including faulty oracle feeds and illiquid markets. Compensating users encourages looser risk-taking when efforts are still underway to measure and mitigate such risks. It also undermines the ability to properly assess risk vs. reward in Compound markets by artificially deflating perceived risk.

Open protocols can aspire to be trustworthy, but they’re permissionless by design. Usage will inevitably go “out of bounds,” despite disclaimers or risk parameters. Compensating users when known risks materialize is unsustainable in the long term.

We’re supportive of solutions that are sustainable and healthy for the protocol, including:

Can you please give me the definition what kind of behavior is aligned with the long-term goals of the protocol?
What is my mistake as an affected user in this case?

You talk about risk management despite the obvious manipulation?

Users didn’t liquidate because of risk management. If under normal circumstances you mean 30% volatility of stablecoin on a single exchange (not globally) then Compound protocol is not a healthy and safe place to hold user funds.
With this statement, you actually said that this protocol is useless. Given the interest on the deposit (0.04% APY) the only healthy feature so far has been the “borrowing LTV” of 75% on Ethereum.
With this kind of thinking, you will lose true customers and you will be left with yield farmers - and then we all know what will happen when a similar protocol offers them better incentives.

We are all aware of your connection to Coinbase Ventures (VC Funds clusters) and it would be bad for Coinbase to admit the malfunction of its product.
Conclusion: A compound protocol based on several VC Funds will probably never be a decentralized platform. Currently, the protocol functions as a joint stock company.

Really well thought out responses from those voting AGAINST here.

While it makes sense this specific proposal is not going to lead to any compensation (and for good reason) I would be curious to explore ways to reward @kybx86 and all those involved in putting this proposal together.

61% of compensation going to one farming operation and using COMP as payment seems to be the nail in the coffin and makes perfect sense to amend these points.

I’d like to emphasize that with this vote failing, those involved in stewarding this convo are going to feel very defeated and these types of discussions are ones that we should always look to encourage and reward, even if the proposal itself ends up failing.

I would be interested in exploring opt-in grants on a case by case basis to proposal authors that are settled onchain (meaning at least 1M in COMP was required) as to encourage amendments of this proposal and future participation from other politicians.

Thanks everyone for their input and excited to report on this proposal this week.

@kybx86 has done a very good job by starting a process that brings long-term value to the protocol - trust in the protocol.
I hope that the proposal will be upgraded in certain elements and put to the vote again in cooperation with the big players because otherwise, we are spinning in a circle (proposal - reject).
We should be more concerned about the statements of certain VC funds that see the “Dai liquidation event” as risk management and in fact it is a complex manipulation of the protocol.

@coopahtroopa I appreciate your thoughtful engagement. Your feedback has been helpful throughout this discussion.

As a liquidated Compound user and COMP holder, I have skin in the game. My hope is that the community doesn’t move on from the objectives of this proposal should I stop driving it. The community should look inward to improve Compound’s risk framework and step up for the 121 users who were liquidated in the events of 11/26, regardless of who steers the boat.

If any member(s) in the community wants to work with me to craft a better compensation proposal, please reach out. (I’ve heard privately from a handful already, and look forward to more).

Great point. Not enough people speaking about Coinbase’s role here, despite their explicit language to reject prices that deviate from the expected volatility of said asset.

Luke Youngblood, who voted for prop32, is one of the main architects of the Coinbase price feed.

Luke, if you read these forums, we’d be interested in hearing your opinion.

I’d like to put on the record that the number of users affected was a non-negligible percentage of the userbase.

Would love to hear input from Coinbase’s trade surveillance head apart from their “short” comment here.

Coinbase looked at the data from many different angles and concluded that not only were there no price manipulation alerts in our trade surveillance software, but we did not find any evidence of collusion or single actors that pushed the price higher. We believe our books properly operated according to the availably liquidity at the time which, in stablecoin markets, may become thin as price moves away due to the collateralized nature of these markets. And, Coinbase Price Oracle accurately repor…

Would also appreciate it if Coinbase can shed more details on the said event.

@Elkins I was wondering if Coinbase can atleast provide anonymized data on said price event. Also, if possible, could Coinbase also divulge the volume of orders needed to move the CB’s Dai market by 30% . Thank you!

As a Compound user (note: not farmer or private investor), we’re responsible for knowing the potential risks involved in using the protocol, including faulty oracle feeds and illiquid markets

Potentatial risk when somebody need cheap Ethereum, manipulate the market with front-running and false-reporting, get my Ethereum for 1ETH:377$ (because global price of DAI in moment is 1$) with nice premium of 100-150$ per Ethereum.
And Pantera Capital said that I need to know risks in that “fairytale risk story”.
I didn’t know the risk of being robbed by protocol aggressive liquidation system powered by bots.
I didn’t know that the “borrowing function” should not be used.
I was used Compound before COMP token issuance because protocol had use case for my business and I didnt know that criminal activities are allowed.

I just used lending/borrowing service(product) when protocol was manipulated - i didnt farm COMP, I was used stablecoin for business liquidity - what is the point?
That Alex Mashinsky (Celsius) REPUTATION worth more than Compound protocol? I know that worth more than Pantera Capital for sure.
Your statement really raises the question: “Do we really need DeFi?”

Not sure, why you want to dig deeper into the events which happened at Coinbase. No matter which the exact reason for this market dislocation was, the root cause for the “liquidation event” is, that the open oracle uses Coinbase as a single price source. If you want to dig deeper, I think you should ask, why the open oracle ever is gone live with only one price source.

why the open oracle ever is gone live with only one price source. 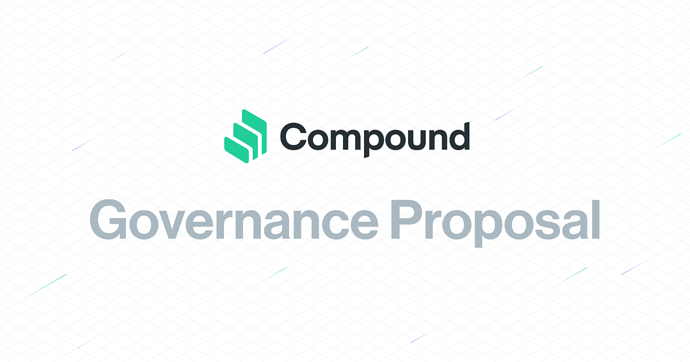 Not sure, why you want to dig deeper into the events which happened at Coinbase.

Sure, that’s obvious. But why was this proposal ever created? A good source for this answer could be the author of the proposal.

Im also in that discussion, I actually am for it but waiting for someone to submit code and start a CAP. Would also gladly delegate my measly vote to it.

Agree, Coinbase can provide some data and stats about the event, but problem is that Coinbase Price Feed Data is a centralized part of the “decentralized” Compound protocol.