I am proposing adding FRAX to Compound. I’m a member of the Frax community. I’m hoping to gather feedback, especially around proposed parameters. FRAX’s capital efficiency and lending AMO should make FRAX the least expensive stablecoin to borrow on Compound. As time passes and FRAX proves itself as a useful asset on Compound, I hope FRAX will gradually be treated more like a fully collateralized fiat stablecoin on Compound.

Summary
FRAX is a redeemable stablecoin with a dynamic collateral ratio that adjusts based on market demand. Frax is unique among recent stablecoin designs in that each FRAX is always redeemable for $1.00 worth of assets from the Frax protocol. This has kept the price of FRAX in a relatively tight band around $1.00, making Frax an ideal asset to borrow and lend against on Compound. Frax is already integrating with Compound and is currently the 17th largest cUSDC holder (~$30m) and growing, demonstrating a strong synergy between the communities. As the FRAX supply increases, additional collateral will be deposited into Compound. The Frax community has also chosen to hold all COMP rewards received to be an active participant in Compound governance.

v2 of the Frax protocol recently launched and introduces a lending module that can be built directly into Compound. This would enable the Frax protocol to supply large amounts of FRAX to Compound on demand. FRAX could become the lowest borrowing cost stablecoin on Compound, which would be quite attractive for Compound borrowers. The first step towards this integration is the addition of FRAX as an asset on Compound.

FRAX Stability
Since launching in December 2020, FRAX has held a tight band around the $1.00 price target. Below is a chart showing FRAX price history since launch:

Each FRAX is collateralized by approximately $0.86 USDC (including interest bearing equivalents) and $0.14 of the Frax governance token, FXS. When the price of FRAX is at or above $1.00, the protocol gradually lowers the collateralization ratio of USDC to FXS. When the price of FRAX is below $1.00, the protocol gradually increases the ratio. FRAX can always be minted or redeemed by the protocol for $1.00 of assets, which counterbalances significant price deviations from the $1.00 target. Frax emphasizes a highly autonomous approach with no active management of the price stability function. More information about the mechanisms behind FRAX can be found in the links below.

FRAX is not an algorithmic stablecoin. There are algorithmic aspects of FRAX (the protocol uses FXS as a tool to stabilize the price of FRAX) but it is better understood as a capital efficient collateralized stablecoin. Given that the Compound collateral factor of FRAX is likely to be well below the current collateralization ratio of 86.5%, FRAX as a collateral asset on Compound would effectively be over collateralized by a healthy margin. It is also worth noting that there is also approximately $60m of Uniswap, Sushiswap and FRAX-3Pool LP tokens locked within the Frax protocol. A significant portion of this is locked for greater than 2 years. This provides guaranteed liquidity for FRAX and provides significant benefits to the stability of the protocol in times of volatility.

Lending AMO
Frax has built a lending contract (AMO) that will integrate the Frax protocol directly into Compound to supply FRAX on demand for borrowing. This would be somewhat analogous to the Fed discount window, where borrowers could borrow directly from the FRAX protocol via Compoound. A direct integration with Compound will also make supplying FRAX more attractive to other market participants because there is a guarantee of FRAX liquidity directly from the protocol, avoiding the pitfalls of high utilization rates in DeFi money markets.

Misc. Project Info
There is approximately $102m of FRAX liquidity currently on Uniswap. The main venue for FRAX is slowly shifting to a Curve FRAX-3pool; the stableswap curve is so much more capital efficient at holding the $1.00 price target. FRAX volume was averaging about $9m volume in March - Coingecko is currently under reporting the volume as it does not include the Curve pool or Sushiswap. Given that FRAX can always be minted and redeemed at the protocol, daily volume is less of a factor in my opinion. Frax has undergone extensive code reviews and was audited by Certik with additional audits upcoming.

Input on Proposed Parameters
I’ve spoken with the Frax team and they are happy to help any with oracle / contract deployment needs. I’d appreciate some Compound community input on the Collateral Factor and Reserve Factor. Given that each FRAX is backed by approximately $0.865 of USDC, cUSDC, aUSDC and yUSDC (obviously on chain), it would make sense to me that FRAX’s Collateral Factor and Reserve Factor would look more like DAI than USDT - perhaps a CF of 60% and RF of 15% to start. I also understand if a more conservative approach is desired as things get off the ground - please let me know what you think!

Thank you for your time and participation. Please let me know if you have any questions or concerns. As I receive input, I’m happy to revise the proposal to incorporate it. Reference links are below.

Thanks for creating this proposal here @metalface. Really important for FRAX to get on Compound as we are the most capital efficient stablecoin on the market. As everyone can see, our peg is perfect and rock solid just like DAI, USDC, etc. I’m also confident that due to the capital efficient design of FRAX, it will be the cheapest/most affordable stablecoin to borrow which would increase Compound usage by a lot.

Additionally, it’s important to note that the Frax Protocol itself is one of the largest lenders on Compound with its idle collateral. So there’s incredible synergy here. Frax Protocol lends over $30m on Compound to earn yield with its unused collateral. We also earn COMP tokens for this lending that we have never sold and do not plan to sell. We want to be an active part of Compound governance as important players in the DeFi space.

Very excited to build with you all if the proposal is accepted for a vote on chain!

Quick note - I’m not sure if the current oracle soln. can be easily adapted to support FRAX: Compound | Docs - Open Price Feed

Hey guys! I’m bumping this up to get more insights from the Compound community as well as now that the recent Chainlink oracle proposal has been passed through COMP governance, this should address @jmo’s concern about FRAX not having an open oracle feed. FRAX has a Chainlink feed in both FRAX-ETH and FRAX-USD which can be leveraged if COMP governance votes to include FRAX into the protocol.

I also want to update on our progress. Since this proposal was created, FRAX has not just grown but has thrived, becoming the premier decentralized stablecoin that has successfully developed new algorithmic stability mechanisms. We’ve never broken our peg in over 7 months of operation now. Market data is on our side. We’re also ranked as the 11th largest stablecoin by Defipulse with performance on par with all other stablecoins ranked in the list.

Thanks @inkymaze - it’s exciting to see FRAX supported by Aave. Since the original post, Frax has more than tripled in supply, completed an audit with Trail of Bits and also has a FRAX / USD Chainlink price feed which should address @jmo concerns: 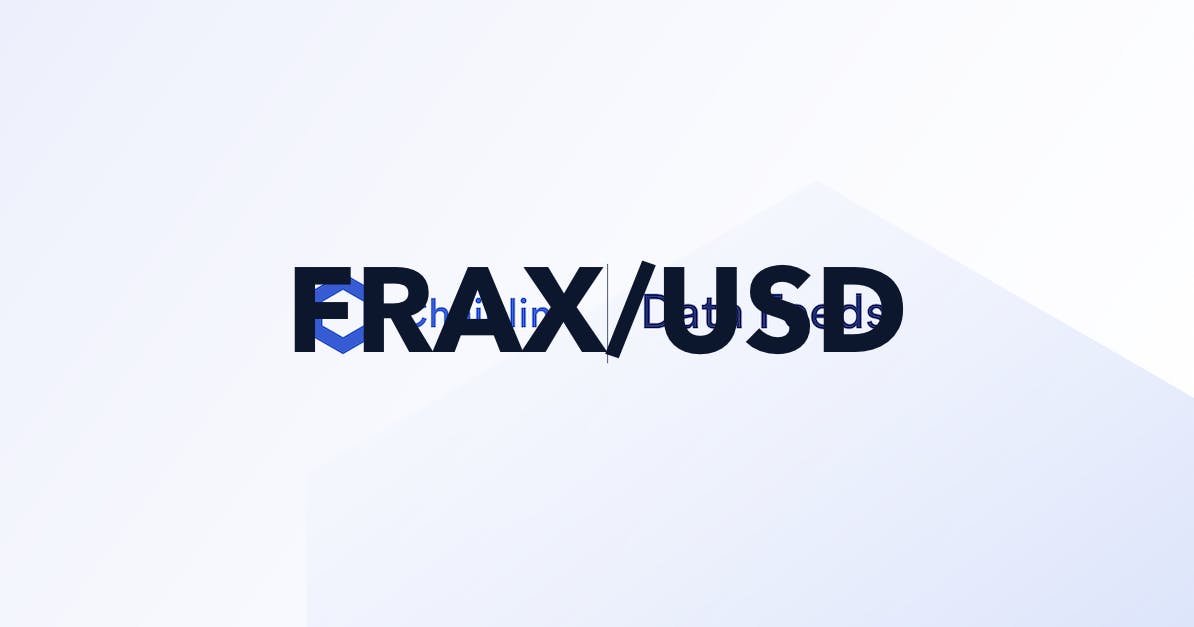 It’s nice to see the interest in the newer generation of stablecoins that are actually stable (shoutout to FEI for their recent success and having an awesome community overall). Let me know if you have any questions, would love to move this forward.

Gently bumping this. Frax has been live and stable for nearly a year and has over 1bn FRAX circulating. Frax lending AMOs are currently supplying over $100m of liquidity to other lending platforms. If Compound adds FRAX, there will be liquidity. Frax has chainlink price feeds. If Gauntlet or other’s see any issues here, I’d be happy to try and find the right person to address them - otherwise would love to push this forward.

Gauntlet is recommending that FRAX be added as a collateral asset on Compound. FRAX is an exciting new stablecoin that will provide more stablecoin liquidity to the Compound protocol in addition to DAI, USDC, and USDT. By convention, assets are usually listed on Compound with a collateral factor of 0, but given the liquidity and volatility profile of FRAX, the Gauntlet Platform expects to ramp up the FRAX collateral factor post-listing.

FRAX is currently listed on exchanges such as Uniswap, Sushiswap, Solarbeam (on Moonriver), Pangolin (on Avalanche), and more. The liquidity for FRAX has been steadily increasing, with the 90, 60, and 30 day ADVs being $22M, $30M, and $43M respectively.

Note that while the ADV of FRAX is increasing, it is still substantially lower than DAI (roughly 10X lower) and USDC (roughly 50X lower).

FRAX has a 36% annualized volatility over the past month, which is more volatile than DAI (4%) or USDC (2%).

The top 10 FRAX token positions are listed below:

As seen in the chart below, the top 10 positions make up 87.6% of the total FRAX supply. However, the majority of those tokens are either locked in Curve’s FRAX3CRV pool, other exchanges, and bridges.

If FRAX is trading below $1 on exchanges, users are incentivized to burn FRAX in exchange for $1 of USDC and FXS. Conversely, if FRAX is trading above $1 on exchanges, users are incentivized to mint FRAX by depositing USDC and burning FXS, then selling FRAX on the exchange. This way the supplies of FRAX and FXS are controlled while maintaining a peg to the USD. While the FRAX protocol is decentralized, the collateralization mechanism relies on USDC as collateral, which is centrally backed.

Given that FRAX is heavily dependent on USDC, Gauntlet’s platform will carefully analyze how Collateral Factor changes to both USDC and FRAX may affect their respective USD pegs.

Completely agree that FRAX would be a great addition to Compound and looking forward to seeing the proposal soon!

Looking forward to seeing the proposal. FRAX has grown substantially over the lifetime of this thread, and the market has shown its durability. We support the addition of FRAX as an asset on Compound.

Agree with the above, Blockchain at UCLA supports this proposal to add FRAX as an asset to Compound

Blockchain@Columbia supports this proposal to add FRAX to compound given appropriate risk parameters are added. We think that it is important to add more stablecoins on the decentralization spectrum to Compound to help support their usage in the ecosystem and give users the widest variety of assets to borrow/lend on Compound.