OpenZeppelin, in its role as a security advisor to the Compound DAO, has conducted a post-mortem to provide a summary of the incident that temporarily disrupted the price feed to the Compound V2 ETH market. This incident started with the execution of Proposal 117 to upgrade the oracle mechanism and ended with the execution of Proposal 119 which resolved the issue by reversing the upgrade. We’ll share a retrospective on what contributed to the issue, how the response was handled and then suggest recommendations to prevent it from occurring again and improve security going forward.

Compound, like many lending protocols, relies on an oracle pricing feed to ensure that its markets remain healthy and up-to-date. The oracle system used by Compound is based on ChainLink price feeds but uses anchors from Uniswap pools to ensure that prices don’t fall outside an anchor-defined range. Compound has been using this open oracle system since June 2021 when it moved away from Coinbase price feeds as part of Proposal 47.

The open oracle system was first built to use pricing from Uniswap v2 but since the release of Uniswap v3, more liquidity has been moving to those pools instead. For that reason, an upgrade was needed to update the anchors to use Uniswap v3 for the most accurate pricing. These changes were developed by ChainLink in coordination with GFX Labs in late 2021. The PR then received 3 separate security audits from Dedaub, ABDK and OpenZeppelin in which only minor security issues were raised and were mostly addressed.

In May 2022, the upgrade changes were proposed in the Compound forum and discussed by the community. After incorporating community feedback, the implementation contract was deployed by ChainLink on August 5th and submitted for an upgrade by GFX Labs on August 22nd as Proposal 177. It passed quorum with unanimous approval from all active voters and became available to execute on August 30th.

The following covers the timeline of events from start to end of the incident. Some of these event descriptions are taken from forum updates that were posted as the incident occured.

As mentioned in the timeline, the source of the issue came from an integration issue between the new oracle contract and the cETH market. Unlike all other cToken contracts, cETH does not support the underlying function since it depends on native ETH and not on an underlying asset. As a result, when calling getUnderlyingPrice for cETH, the function returns empty bytes that cannot be decoded and the call reverts. In short, this produced a denial of service whenever the oracle tried to retrieve the ETH price. 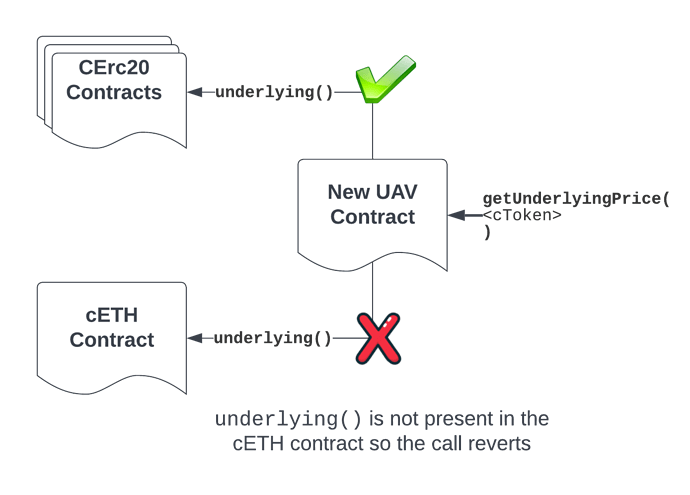 This integration bug meant that the cETH market was effectively frozen without the ability to supply or borrow from it. Every user that entered the cETH market (by either minting cETH or calling enterMarkets) could not query the ETH price for any borrow, redeem or liquidation actions. This also meant that any users holding cETH were not liquidatable, representing a further risk for the protocol until the issue was resolved. The simplest immediate solution was to roll back to the prior oracle implementation. Work is now underway to fix the issue in the v3 upgrade with plans to redeploy it after it goes through greater scrutiny and integration testing.

With the issue resolved, it now becomes important to analyze the factors that contributed to this failure with a focus on process over people. Many reputable parties were involved in the events leading up to the incident so we must consider how Compound contributors, OpenZeppelin and the community as a whole can learn from this incident. It’s also important to acknowledge what went well leading up to and during the incident in addition to what did not before finally considering what changes should be made.

Overall, the incident was successfully resolved with a prompt fix submitted, given the 7-day governance constraint, with no direct loss of funds. While ETH markets were favorable to Compound during the incident, proactive countermeasures were also taken to protect the protocol if liquidations became a risk. A lot of community members came forward to assist during the incident and the collective support made a big difference in protecting the protocol while the fix proposal was being passed.

What could have gone better?

Overall, it’s clear that several failures occurred in the pre-deployment process that must be addressed for all Compound proposals going forward. While the incident response was largely successful, there are also areas here that can be improved upon given what’s been learned.

It’s also important to note that while no loss of funds occurred with this specific incident, these types of integration issues could result in far more lasting damage. This should be taken as an opportunity to reflect on what can be done to improve security to the point that these issues are incapable of finding their way into production.

What should be done differently going forward?

With this incident now resolved, there are areas where both OpenZeppelin and the Compound community can improve. The lack of complete simulation testing, complex code dependencies and unclear security processes ultimately led to a failure in catching this bug in pre-deployment. While the incident response was successful in resolving the issue, we also see a need to improve here as well. However, before these issues can be addressed, we need to first clarify the security role for OpenZeppelin, proposal authors and the community at large.

While OpenZeppelin is responsible for auditing all Compound upgrades, we see this function as the last line of defense for Compound, not the first and only defensive measure. Security first starts with the initial design of a proposal change, then its development, testing, simulation and then finally an audit as a final step before submission. Monitoring and incident response capabilities after deployment are also a crucial consideration to plan for in each proposal. This holistic approach to security throughout the development lifecycle is already well established in web2 security circles and has been more recently discussed for web3. As Compound’s Security Partner, OpenZeppelin should still be involved in the security of these other stages of the proposal lifecycle but we cannot do so alone.

Based on what the OpenZeppelin team has learned during this incident, as well as what we’ve experienced over this past year, we recommend that the Compound community establish clearly documented security policies for all proposal changes going forward. We think that the formation of a formal working group, made up of prominent community developers, would be the best forum for these changes to be discussed and implemented. We’ve proposed this idea to several community stakeholders already and will be preparing a more formal proposal to share in the coming weeks. We expect that OpenZeppelin will take a leading role in this group but we will require participation and feedback from other community members to ensure new policies are successful.

As a starting point, we recommend the following security policies be considered:

OpenZeppelin stands ready to help Compound implement all of these changes. We are also conducting an internal post-mortem to improve our own audit practices so that we do a better job of catching integration issues outside the immediate scope of PR changes such as this one. However, we don’t believe any protocol can safely rely on audits alone or any single security method and that’s why we ask the Compound community to consider these new security policies and a supporting working group as crucial requirements for protecting the protocol.

Compound is one of the longest running DeFi lending protocols with billions of dollars in TVL and many downstream protocols, products and users that depend on its markets. Downtime due to upgrade issues cannot be tolerated going forward and so this incident must be used as an opportunity for Compound to improve its quality assurance process for proposal upgrades as well as its incident response.

This incident was preventable and can be prevented going forward with clearly defined security policies that should start with mandatory simulations for all proposal upgrades. OpenZeppelin will be taking the lead in implementing these changes but we will need the community’s support to ensure that security is improved at every step of the development process leading up to deployment and beyond. A defense-in-depth strategy, coordinated by a working group that creates explicit security policies for all proposal upgrades, is the best path forward.

We hope this post-mortem helps Compound and other protocols improve their security and better protect the open economy. We’re invite the community to share further feedback and to be on the look out for a more detailed proposal to create a developer working group.

Nice to see this post-mortem published

Since the first post in Protocol Development on this forum describes a recommended process for contributing to the protocol, I would just add that ultimately governance participants need to enforce that these processes are followed.

Compound III provides significantly better tooling in this regard, so the solution to (1) and (2) might be to move in that direction. A challenge for (3) is maybe finding a general-purpose undo mechanism, but I agree that it’s a great idea to explore.

Thanks @jared. I agree that the post you linked is a great starting point and might just need some minor updates since it was published in 2020. The next step could be a more living checklist for each proposal to verify that each step was performed to be verified by community participants. Preferably, I think this should be done through codebase PRs to keep everything in one place.

Compound III codebase tooling is definitely superior to V2 so this is another reason to push for a migration to the new markets.

Any good shadow fork solutions out there for devs?

I think the most important action item is the formation for a formal working group overseeing/orchestrating those operations. This is the main missing thing and major improvement, which can also set a good standard for other protocols making Compound leading the governance ops practices.

In addition, I would recommend to make explicit adding pre and post checks with governance proposal. Simulations may help but on-chain conditions can change blocks by blocks. We can leverage atomicity to avoid to perform an upgrade if a condition is not anymore true or the changes break core protocol functionalities.

In the specific case, a small borrow tx in the proposal could have spot the issue and revert the proposal passing.

Looking forward for your feedback.