Below are Gauntlet’s initial recommendations on interest rate curves for the WETH Comet for Compound III. 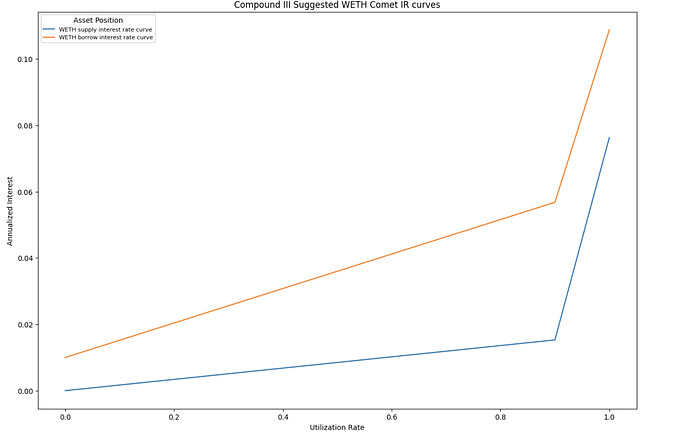 Note that these numbers will differ slightly from the APR numbers because of compounding interest in blocks.

Some core assumptions to this recommendation are that 1.) stETH has an annualized yield of approximately 5%, 2.) the current utilization statistics of the Compound II ETH market are based on the fact that there is no strong use case for borrowing ETH and not that the interest rates are too aggressive, 3.) the Compound III USDC Comet provides reasonable data points, but the WETH Comet will have a significantly different use case, 4.) users will be elastic with regards to interest rate changes around the boundary of stETH annualized yield. 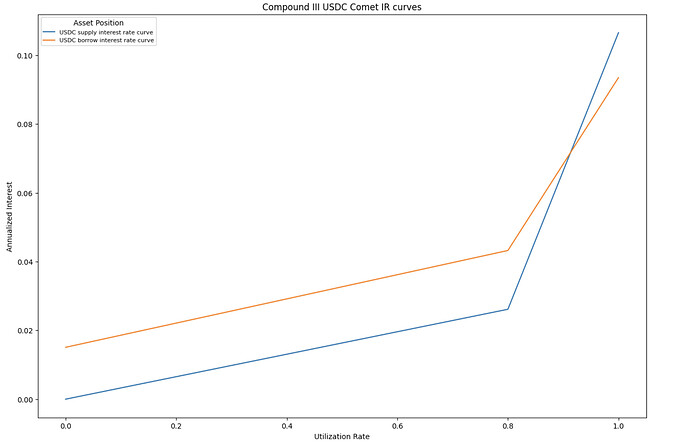 Since the WETH borrowed cannot be used as collateral, there is less market risk concerning WETH liquidations, and thus there is less need to make the max interest rate especially high.

This might be a silly question, but per the USDC IR Curves, how is the USDC supply interest rate higher than the USDC borrow interest rate at 100% utilization?

If my calculations are correct, with the curves you are proposing the implicit reserve factor at 90% utilization would be 70% (and 53% at half utilization).

This instance of Compound III is very promising and could have a real organic traction without any rewards, with small reserve factors (see the metrics of stEth/Eth on Aave, Morpho-Aave, Euler…). It don’t understand why it should depend so much on COMP rewards.

Is the goal of this to profit from COMP distribution to increase the reserve of the Compound DAO? In this case, it should at least be explicit, in order for the community to discuss about it, especially if the reserve factor is so high.

I agree with @MathisGD that the implicit reserve factor could be significantly lower (e.g. interest rates across utilization rates could be higher); one of the original concerns with the market would be that native ETH suppliers would have below-average incentives to participate (vs, staking their Ether natively via proof of stake).

Are there other models that maintain positive implicit reserve factors, simply by adjusting supplyPerSecondInterestRateSlopeLow?

Thanks all for the feedback - relayed to our team and will come back here.

Hi @AndrewA - great question, some color can be found below:

This is an intended feature of the current interest rate model; it generates reserves when above 50% utilization, and slightly churns reserves when below 50% utilization (though in a way that should, in theory, grow the market size). You can see the model in this thread from the launch of the market. It should be noted that the interest rate model is only one of two systems that can increase and decrease reserves; the liquidation process also increases and decreases reserves. In aggregate, th…

We agree that a highly important consideration is properly incentivizing supply. Our original supply interest rate (even without COMP incentives) is in line with historic data for ETH supply rates. We acknowledge that since ETH cannot be used as a collateral in this Comet, the protocol requires a higher supply interest rate to motivate users to supply. However, given the behavior of these linear curves, having interest rate values that are closer together (both at the base value and at the kink) leads to additional utilization points where there will be a negative reserve rate.

Our recommendation above (which we shall refer to as Option 1) constructs the interest rate curves such that there are fewer points in which there are negative reserve rates. There are some tradeoffs here:

To @rleshner’s point about maintaining a positive reserve rate, one of our most important considerations was minimizing the behavior of negative reserve rate. However, if we assume that the utilization of the pool will mainly be around the CF and LCF (90%, 93%), we can build the curves below where suppliers have more incentive, but there will be more regimes with negative rates (thus increasing the chances that reserves “run out” in extended regimes of negative rates).

Open questions: what is the total amount of ETH reserves that the Comet plans to launch with? That will help give us bounds for how negative the reserve rate can be. If we seed the Comet with more ETH reserves, then we can be more aggressive with allowing negative reserve rates. With this additional data point, we can further fine-tune these recommendations. 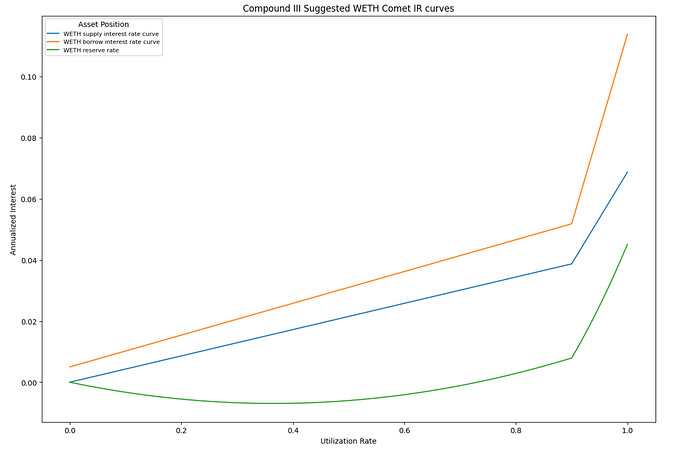 Following the conversations on this thread, and discussions on recent community calls and in Discord, the parameters to deploy cWETHv3 have been finalized on the pull request:

The price feeds of the deployment use the following inputs:

OpenZeppelin has completed an additional audit of modifications to the price input contracts, since the original post in this thread.

The initialization proposal will take the following actions:

One thing I’m curious on is Gauntlet’s denomination in $USD with their initial recommendation. On November 22nd of last year, ETH was $1100 USD. Today, ETH is closer to $1500 USD. With liquidity for wstETH and cbETH both being mainly in ETH, this means there’s deeper $USD liquidity for these assets as well.

If the whole market is denominated in ETH, could Gaunlet denominate their recommended supply caps in ETH as well? cc @pauljlei

From November 22nd to now, liquidity for newer assets like cbETH has improved meaningfully as well (greater than ETH’s increase in price). At the time of their initial recommendation, there was 1.5% slippage for $1.3mm sell of cbETH. Today, there is roughly 1.5% of slippage on a $7.3mm swap. 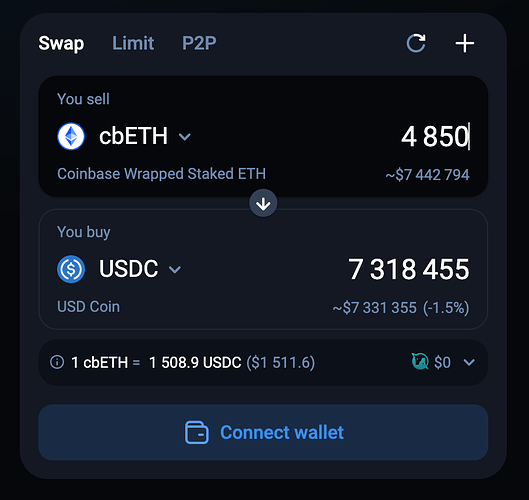 Your intuition is right, the governance cycle is too long, the market changes cause the data to change too much, and the previous data is not enough to support the conclusion of the parameters.

The result is that the coefficients introduced cannot match the market, and then they will modify the parameters many times to do some repetitive work.

The proposal is now live: Proposal 144.

Agree. Is there any possibility we can automate this process?

Hi @AndrewA, the proposal initializes the market with a supply cap of 64,500 wstETH and 7,100 cbETH.

Yep! The issue I was referring to was how this supply cap was suggested originally in $USD terms back in November, which leads to a meaningful difference in ETH terms.

The recommendation from November for $100mm of wstETH and $10mm of cbETH would have been roughly 82k wstETH and 9.2k cbETH at the time. This is a pretty meaningful difference from the 64.5k wstETH and 7.1k cbETH that was formally proposed.

And since this market and most of the liquidity for the two are denominated in ETH, I’d guess that suggesting parameters for this market in ETH terms would be more accurate as prices move.

Till now (27Jan23), I summarized the borrow and supply statistics for cbETH: