Recently the v2 cCOMP market has seen high utilization, with total borrowings currently at the 90,750 COMP borrow cap. This implies that market parameters are not well optimized and some users are taking advantage of artificially compressed borrowing costs.

The borrow cap on COMP was initially set to prevent governance manipulations, but with recent votes showing strong participation (typically 500,000 COMP or more) and proposal threshold already well below the cap (25,000 COMP required to submit a proposal) without negative effects, I think that it may be safe to increase borrowing caps to allow for more utilization and greater cCOMP yields (particularly valuable considering recent removal of COMP incentives to cCOMP suppliers).

If anyone has input on ideal rate model or borrow cap parameters please give your input! If there’s support for adjusting the cCOMP market, I’ll push forward a proposal for the final consensus parameters.

Planning to move this proposal on chain in the next week unless there are any objections!

Update on market status and impact on proposed changes:

While total borrowed remains at the 90,750 COMP borrow cap, utilization has increased to 15.8% due to recent withdraws. This yields a current borrow rate of 7.18% and supply rate of 0.82%.

Given current high yields for LPing COMP on Balancer/Aura, it seems possible that borrowing may hit the new cap of 150,000 COMP despite higher borrow rates.

Thanks for the proposal, @monet-supply - Gauntlet is looking into the market implications of the above.

COMP’s borrow balance has been hitting the 90,750 cap since early September. Gauntlet has limited market risk concerns with Monet’s borrower cap increase, but we want to note that around 90% of the borrowing is being driven by this one account. This user’s borrowing behavior will probably be elastic to the interest rate parameter changes.

As noted by @monet-supply, the borrow cap on COMP was initially set to prevent governance manipulations. Gauntlet doesn’t assess governance risk, but governance risk has been partially mitigated by stronger voter participation (550k+). From a market risk perspective, it is unlikely that increasing cCOMP borrower cap to 150k will add outsized risk to the protocol.

This is correct from a historical perspective — the cap was set to prevent malicious proposals. If the borrowing capacity is fully utilized by organic borrowing demand this is less of a risk.

So, @arr00 pointed out that cCOMP rate model may be used in other assets as well, and after checking it looks like it was indeed used for cAAVE, cMKR, cYFI, and cSUSHI. Given that the existing rate model seems suitable for these other assets, I don’t think it would make sense to submit COMP rate adjustments in the existing IRM contract.

Instead, I plan to submit a proposal just for updating the cCOMP borrow cap (from 90,750 to 150,000). If the new borrow cap is reached, we can then consider creating a new rate model specifically for cCOMP to allow for adjusting rates separately from the other assets.

Ok last update on the proposal implementation before I put it up on chain!

The interest rate model currently in use for cUNI (0xd88B94128Ff2B8Cf2d7886cd1C1E46757418cA2A) is not used by any other markets, and has a somewhat higher path of interest rates compared with the cCOMP rate model (0xd956188795ca6F4A74092ddca33E0Ea4cA3a1395) which is also used across AAVE/MKR/YFI/SUSHI markets. While higher rates for cUNI were initially warranted to avoid unsafe utilization, it now makes sense to move the cUNI market over to match other defi tokens. On the other hand, cCOMP’s capped borrowing capacity makes it more suitable to switch to a higher rate model such as the one currently in use for cUNI.

The most expedient and simplest way to effect this is to move cUNI to the prevailing defi token interest rate model currently used for AAVE/MKR/YFI/SUSHI, and then move cCOMP to the rate model previously used by cUNI.

If the COMP market reaches the newly increased borrow cap despite the higher interest rate model, then further changes to the rate model or borrow cap can be submitted to alleviate excessive utilization and allow the market to reach equilibrium based on cost.

With LP rewards on Balancer/Aura continuing to exceed these projected borrow rates, there is decent likelihood of the new cap being reached. 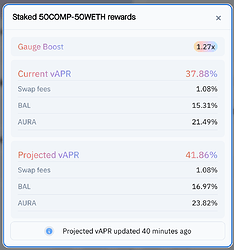 Sorry for the twists and turns getting this proposal into a finalized state!

Proposal has been submitted and voting begins in ~2 days: Compound

voted. fully agreed with your points.

By the way, does it have some table or dashboard to see the current IRM status? in compound homepage(including document), it is hard to recognize which markets are using the same or different model. (it would be helpful to understand compound structure for voters and new developers.)

Proposal has been passed and executed! Currently the cCOMP borrow total is about 85,000 COMP, comfortably below the new 150,000 COMP borrow cap.

It looks like incentives for the balancer pool may not be renewed, so there is a possibility of borrow utilization declining once these existing rewards run out. Will be worth monitoring. 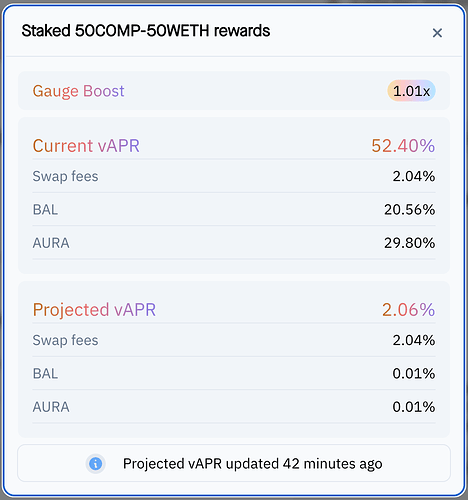