Currently we have about 55% capital utilization on USDT, and USDC, and about 75% on DAI. This is bad because it makes for a huge spread between what borrowers pay per dollar and what lenders receive per dollar, with no one benefiting. This inefficiency pushs borrowers and lenders to other platforms. 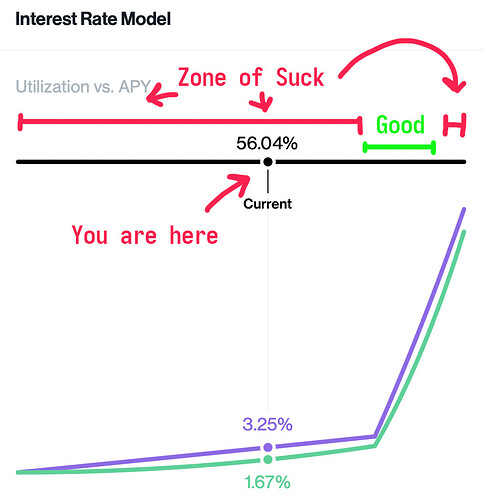 Ignoring incentives, a borrower pays 3.2% APY on USDC, but a lender receives only 1.6% APY. That’s bad in a competitive marketplace. Both sides would be massively better better if the borrower was paying 2.7% and the lender was receiving 2.2%. No one would be the loser for it, and it would pull in capital from other platforms.

The going rate that people are willing to lend at or to borrow at changes based off market conditions. In a bull market, everybody wants to borrow all the stables they can get their hands one. In a market like today, borrowers are only willing to pay up to about 2.3%, after incentives.

Because of this changing ideal rate, the optimal knee point of a two line interest rate model is not a static thing. It changes with the market. While the current interest rate models were decent in boom markets, it’s time to readjust.

Right now, the current Compound knee points are clearly not optimal, and result in borrowers being charged 2x what lenders are willing to lend at.

It would be worth considering alternative, possibly dynamic, interest rate model designs int future. Right now, we should to move the interest rate at the knee point downwards so that market rates fit inside our golden zone.

Here are my proposed changes to the primary stablecoin interest configuration. Even though I’m a lender, I’m going to focus on the borrower’s numbers. This is a borrower constrained market right now, and lenders have shown they are willing to loan at rates quite a bit below what borrowers pay. Success right now is about getting the borrowers on your platform and the lenders will follow.

Fundamentally, the interest rate at the knee needs to be below the lowest reasonable interest rate that borrowers are willing to pay, since utilization under that point results in a rapid drop off of capital efficiency.

At the start of the year, there was 2.8 billion USDC borrowed on Compound, today, about 0.85 billion. Since the end of the year, borrowers have been willing to pay between 2.8% APY and 4% before incentives. Historicaly, USDC has been one of the big two stablecoin pools on Compound. 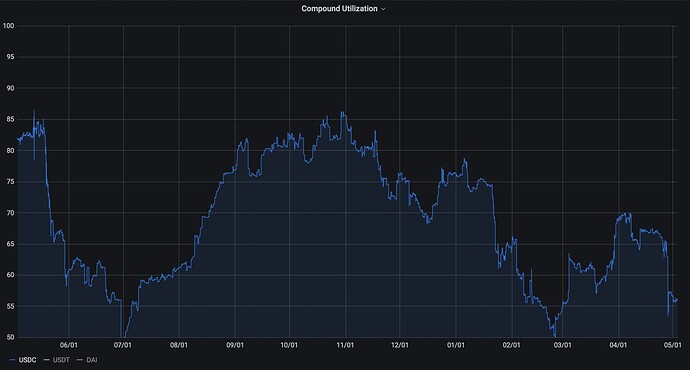 I propose droping the USDC knee point to 1.0% APY, moving the knee percentage to 85% utilization, and setting full utilization rate to 15%.

DAI is the other big stablecoin. Over the last four months, Compound has gone from having 3.7 billion DAI lent out, to .94 billion borrowed. DAI has the most stable utilization ratio of the stablecoins on Compound. Since the start of the year, it’s been between 65%-80% utilization, which correspond to borrowing rates in a fairly narrow range of 4% to 4.7%. 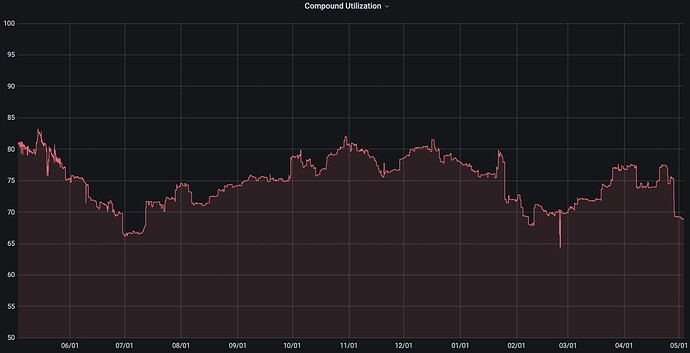 We can use the same rate model as USDC. At current rates, this would make the utilization rate be around 89-90%.

USDT had 650 million borrowed at the start of the year, down to 450 million now. USDT behaves fundamenataly different than the other stablecoins on Compound because it is does not count as collateral. This makes for a much more limited set of lenders, which in turn results in much smaller supply, which in turn results in much more rate volitility as people move in and out of the pool. Sometimes USDT is much higher demand for yeild farming, and so it’s the only stablecoin on compound that has reach 95%+ utilization for any length of time over the last few years. 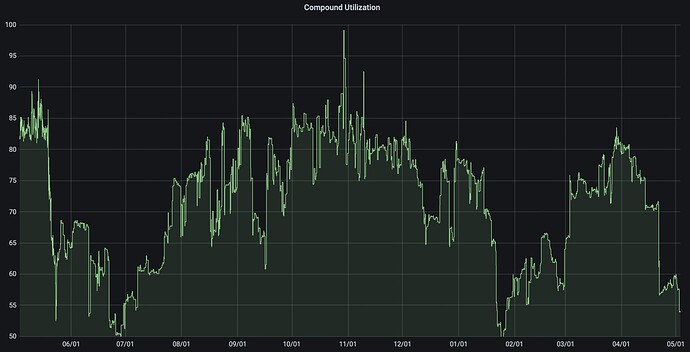 Because of the increased need for liquidity on USDT, I would keep the knee percentage at 80%, set the knee APY to 1%, and the full utilization rate to 25%.

This should result in an average utilization rate between 82%-84%.

Your thoughts? In addition to targeting getting the actual interest rate above the knee, I’ve aimed to target utilization to 85%-90% on the big two pools, rather than the 70-85% that they have have historically had. The size of the funds in each of the big two has meant that they don’t need that much liquidity.

I support this proposal as it is beneficial to both borrowers and lenders.

Compound has been bleeding capital lately & this proposal would help make the rates more attractive to both sides. It’s worth highlighting that the reason it’s okay to have a smaller percentage of liquid capital on hand is that the absolute amount of liquidity will still be huge w/ these particular pools.

Let’s adjust the parameters now, but I agree that it would make sense to discuss if there’s a good way to adjust these dynamically in the future.

I support this proposal, it should be Gauntlet’s job, they still enjoy modifying SUSHI, ZRX BAT.
ashamed.

@pauljlei Would it be possible for Gauntlet to simulate the risk related effects of these changes to the interest rate model parameters? If given a choice between adding 5% to collateral values, or a massive reduction in capital inefficiency, I know what my pick would be.

I’m also open to different parameter values, if those would be better.

Hi @dvf - thank you for all your analysis here to push this forward. Gauntlet has been working on interest rate curve strategies, and @tarun has been leading this internal research since Q4. The interactions between interest rate curves and the risk of insolvency are more complex than meets the eye (and incorporate factors including available liquidity in asset pools, the opportunity cost of capital to lenders, reserves to the protocol, etc.). In addition, the community has plans to change emissions, which will interact in interesting ways with interest rate curve changes. We will keep you posted on progress but want to be cautious and conduct our research thoroughly before making recommendations to the community. In the meantime, changes to collateral factors are a direct method to drive capital efficiency and unlock value to the protocol, and our simulation engine has been and will continue to optimize for risk and protocol revenue dynamically.

I am still convinced that the current interest rate model parameters are badly out of sync with the market. Since my original post here, both DAI and USDC capital utilization rates have dropped further (DAI from 75% to 55%, USDC from 55% to 41%).

This inefficiency means that if we ignore incentives, it’s currently cheaper to borrow and more rewarding to lend the major stables on AAVE than it is to do so on Compound.

I find it difficult to believe that the current less than 60% utilization is necessary for protocol safety on USDC and DAI. If that is actually the needed target, should we not set the interest rate model knee points currently to what we actually need for safety?