Given that Compound V3 USDC Comet has been live for several months now, and a wETH Comet is upcoming, Gauntlet would like to help kickstart the community conversation around migrating users from V2 → V3.

Gauntlet’s scope on Dynamic Risk Parameters is focused on areas in market risk; however, we thought it would be helpful to have one forum thread to conduct community conversation and decision-making around V2 → V3 migration. We defer to the community on strategic decisions but wanted to share some initial thoughts to help kickstart and organize community discussions to drive progress.

V3 offers capital efficiency and risk management enhancements compared to V2, including additional parameters such as supply caps. As such, it is valuable for the community to align on the goals of migration and the risk tradeoffs.

V3 currently only has 1 instance, which is USDC as the base asset (borrow asset), and the only collateral assets are ETH, WBTC, COMP, UNI, and LINK. Because V2 is multi-asset borrow and multi-asset lend, the market structure differences add additional complexity to any migration plans.

What should the community define as the goals and non-goals of migration?

We welcome community feedback and look forward to discussion.

Thanks for opening this discussion here on the forum. We (Morpho Labs) would like to insist on this 2 points:

That’s why we are more in favor of a slower but natural migration. This means doing no change to Compound V2’s parameters for the sake of making liquidity migrate to V3, but instead gradually pushing the V3 to its full potential. We recognize the all the benefits of the V3 for the use cases it covers and are confident in the fact that concerned people will progressively migrate their positions. This is also a strategy that seems to minimize the risks associated with this migration that you mentioned.

About COMP incentives, we don’t have any strong opinions. It should be an effective way to accelerate the organic growth of Compound V3. Reducing them on Compound V2 will certainly decrease TVL, but will not necessarily “kill” the organic use.

Should a DAI Comet market be spun up? This will help users that borrow DAI on V2 migrate.

I think launching DAI Comet market would be very critical before aggressively pushing users to migrate.

That’s why we are more in favor of a slower but natural migration.

Completely agree. I believe that incremental migration is better, especially for key assets. For example, DAI market can be fully deactivated on V2, once 80% of the borrow volume (as of a certain cut-off date) has moved to V3.

This is an exciting and important conversation. To add to the initial context, there is also a Twitter Spaces with OpenZeppelin/Gauntlet/myself on 1/10/23, and the Community call on 1/11/23 where the migration path has been discussed.

To echo what others here have mentioned, because V2 and V3 don’t completely overlap in usecase, V2 should be given the opportunity to run in perpetuity. Rather than taking steps that deprecate V2 (such as lowering collateral factors or freezing markets), we should strive to transfer users and risk for V3’s core use-cases (e.g. borrowing stablecoins).

I also agree that this process should be gradual or phased, which will allow Gauntlet and the community to monitor the liquidity and market risk of each version and recommend changes (or pause) if necessary.

Here is one potential draft approach for consideration and fine-tuning:

For the remaining strategic considerations, here are my personal views:

We wanted to capture some ways to migrate users from V2 to V3 so that we could start to solicit preferences, as some folks in the community have already begun to indicate, on how aggressively the community would like to pursue a migration option. We are painting high-level plans based on level of aggressiveness, and will follow up on a deeper plan and analysis once the community expresses its intent. Of course, we welcome input from the community and are open to hearing ideas outside of our proposed paths.

Top goal for the migration plan is to transfer TVL from v2 to v3’s “core" user group, instead of deprecating v2’s specific use cases that v3 does not cover. We present two approaches with different levels of aggressiveness, defined by the amount of levers that can be pulled to facilitate the migration.

To get a sense of the options we took a look at the positions of the top USDC suppliers and borrowers: 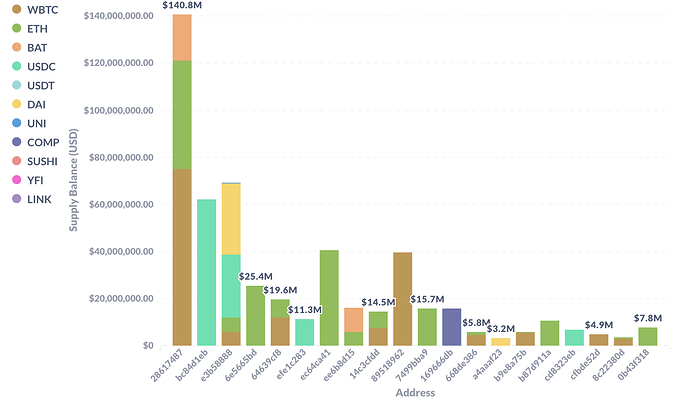 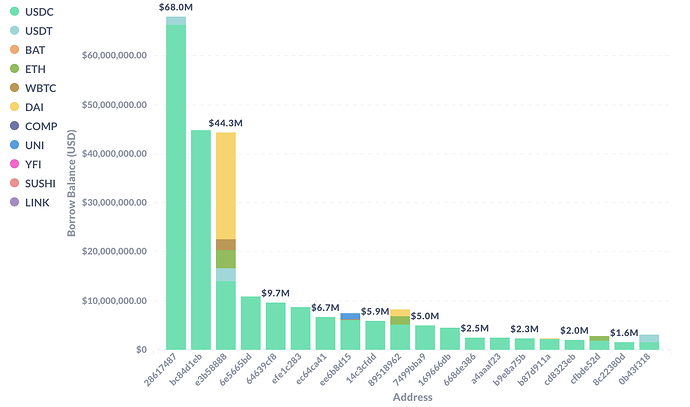 The majority of the top USDC borrowers are users who supply blue-chip tokens and borrow USDC (with major exceptions being the 2nd and 3rd largest USDC suppliers, who are recursive). These are the users the community may wish to prioritize migrating over to Compound v3. 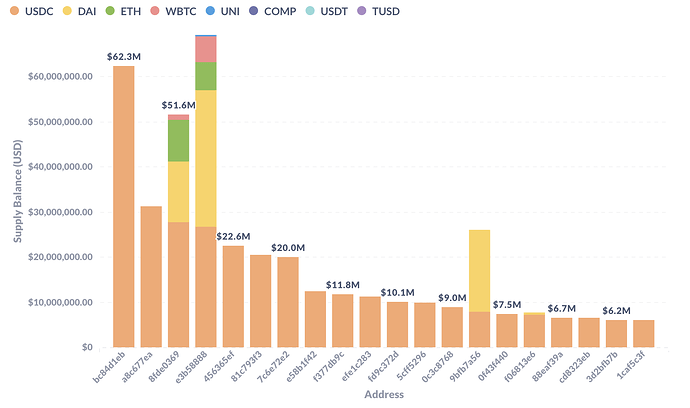 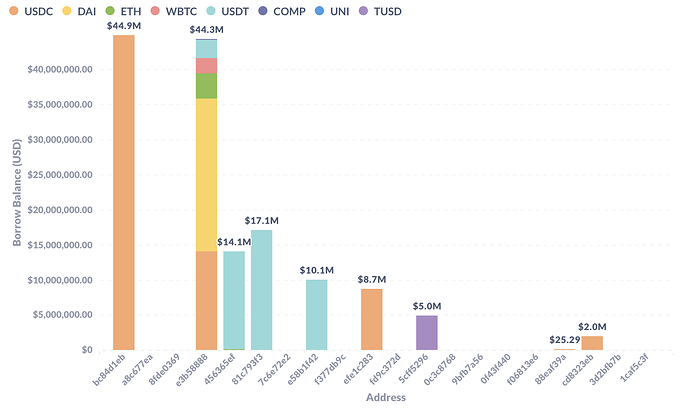 The majority of top USDC suppliers are either recursive borrowers or borrowers who are strictly trying to gain USDC supply APY. Note a few of the recursive borrowers borrow USDT against their USDC supply. The users who supply USDC to earn supply APY are the main liquidity providers for the users who supply blue-chip tokens and borrow USDC. If these users leave the protocol, the borrow APY for USDC will increase, thus incentivizing the blue-chip suppliers to migrate away from v2 to seek lower APY elsewhere.

You can see from the above two charts that the vast majority of non-recursive Compound users are using Compound V2 with a volatile asset as collateral and a stable asset as borrow (note however that the first chart does include all stable assets, not just USDC).

With this user behavior in mind, we formulated the following two approaches.

Top concern for the conservative approach is safer migration with minimal UX impact. Four levers to achieve this goal include 1. transferring COMP incentives from v2 to v3; 2. increasing RF on v2 USDC; 3. increase storefront price factor on v3; 4. increase v3 supply cap. Hereby we present some rationale on pros and cons of the four levers for the community to weigh on.

To achieve the same goal as the conservative approach, with a slightly shifted focus on quick and decisive migration. To achieve this, apply a more aggressive progression plan and apply one more lever. Notwithstanding, we present the two approaches as two prototypes with slightly different focuses for the community to consider, and a final agreement can be anything in between, and we may let go some of the levers if deemed appropriate. 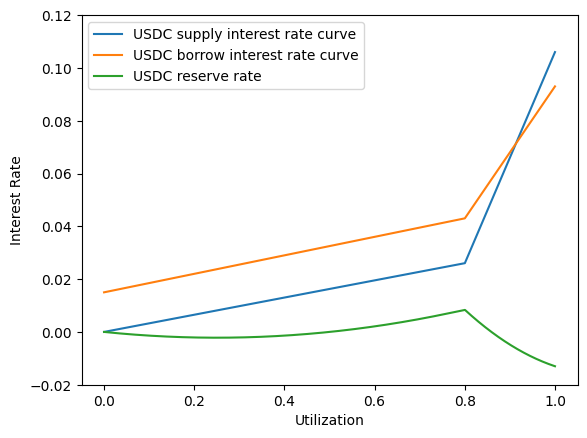 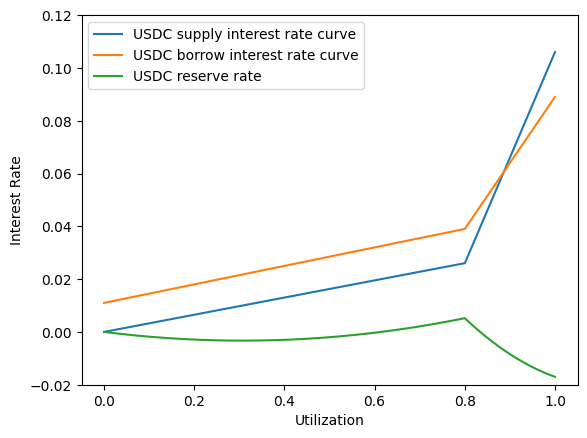 Note that while we are presenting a progression here, the community has the clear ability to stop at any time and change course based on the states of V2 and V3 Compound at the time.

We also considered a few other possible actions but decided against recommending them. Here we list them out and welcome the community’s feedback:

One risk could be temporary liquidity crunches.

The immediate effect of decreasing RF for USDC is a decrease in supply APY to USDC suppliers, thus disincentivizing users from supplying USDC. There are generally 3 types of USDC suppliers:

These users supply USDC and don’t borrow any assets. They are only interested in USDC supply APY and COMP returns. Increasing USDC RF would highly disincentivize them from staying in Compound v2.

These users gain USDC supply APY, pay USDC borrow APY, and receive COMP rewards. Increasing USDC RF would disincentivize them from staying in Compound v2 due to an increasing interest rate spread, but if the COMP rewards are large enough, we may expect fewer of them to flee compared to the previous users.

These users are mainly interested in shorting tokens and probably do not care as much about the marginal USDC supply APY they lose as RFs increase. These users account for the least amount of USDC supply, and we expect these users to be the least elastic to RF increases.

As this pattern repeats, and especially as USDC RF is gradually increased, USDC suppliers and borrowers will continue to be incentivized to leave the protocol. There may not be any long-term liquidity crunches, since high utilization will encourage USDC borrowers to repay their borrowers, thereby allowing suppliers to reclaim their collateral. We expect this to be the case irrespective of how quickly or gradually the RFs are increased.

Another risk is that we may also lose some TVL throughout this process, especially with respect to Reserve factor changes. Particularly we could see an effect on recursive borrowers and to a lesser extent short positions on the protocol. This is similarly mitigated by having a gradual shift in parameter changes and monitoring the effect over time. Equally, users that leave Compound V2 may not go to Compound V3 (for whatever reason).

We welcome community feedback on the above, and as we get more signal as to how the community would like to proceed, we are happy to concretize the schedule plan.

sitions of the top 20 USDC suppliers

Thanks for the insights. Just wonder if the supply/borrow distribution chart publicly available? Seems not available on Metabase.

Hi @RapidsCapital - it is currently not available on that public dashboard, but we are continuing to iterate on dashboards and will keep the community updated on developments.

Great to see this being discussed! Something that may be worth bringing up is the how the top 10 accounts really dominate the majority of stable coin borrow markets in V2.

For instance, the top 10 borrowers account for approximately 72% of the USDC market and 90% of the DAI market.

We built a dashboard a while back that has a section that tracks the top 10 accounts for borrow and supply in each v2 market. Compound Info

If you need this data, you can access it through the Subgraph that powers this dashboard.