A proposal to adjust one (1) risk parameter for two (2) Compound V3 assets.

Updates to the Liquidation Factors allow the Compound protocol to ensure it’s solvency during extreme market conditions. By decreasing these parameters, this increases the incentive for liquidators to take collateral off the protocol’s books as it accumulates.

Gauntlet’s simulation engine has ingested the latest market and liquidity data. These parameter updates are a continuation of Gauntlet’s regular parameter recommendations as part of Dynamic Risk Parameters.

In certain extreme market conditions - Compound III’s liquidation mechanism can be stuck with insolvent collateral. If liquidators can profit from swapping after acquiring collateral from Compound III at a discount, they will acquire the assets, and the protocol can avoid holding the collaterals over time. Thus, liquidity and liquidation factor are two key exogenous variables for successful liquidations (liquidators call absorb, buying from Compound III and swapping them out). While we cannot directly control the former, increasing liquidation incentives can reduce protocol insolvency risk. Gauntlet’s agent-based simulations use a wide array of varied input data that changes on a daily basis (including but not limited to user positions, asset volatility, asset correlation, asset collateral usage, DEX/CEX liquidity, trading volume, expected market impact of trades, liquidator behavior). Our simulations tease out complex relationships between these inputs that cannot be simply expressed as heuristics.

We’d note that given that these parameter changes are for the liquidation incentive, there is not a meaningful impact on capital efficiency. 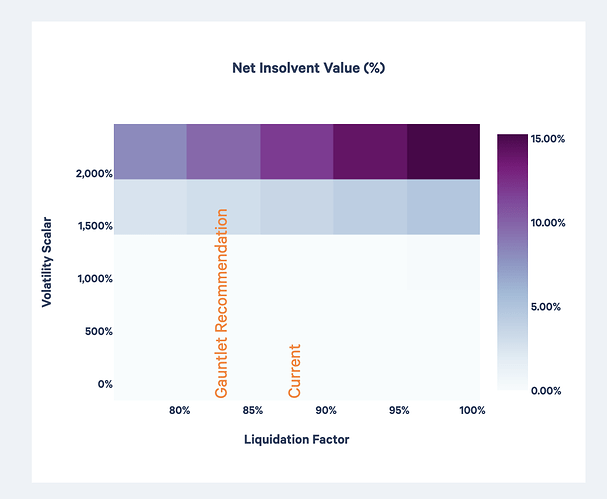 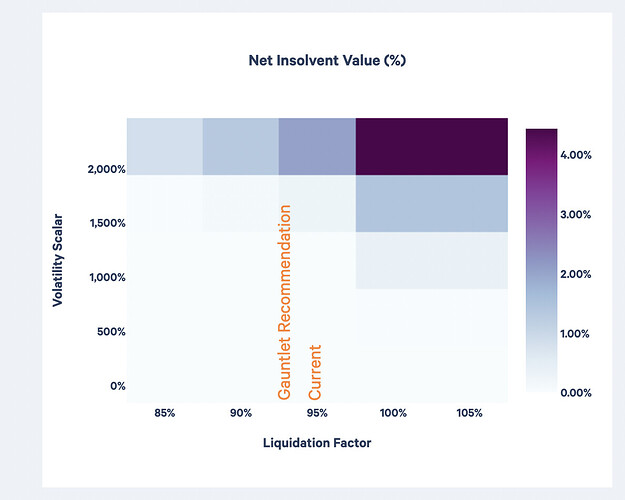 As mentioned, these changes do increase the penalty paid by users when they are liquidated. This is to increase the premium paid to liquidators who take on the risk of selling their collateral, and can offset costs like slippage. This is not positive for the borrow user experience, but is likely justified by the reduction in VaR. Looking at COMP as the example:

Another option here would be to reduce the StoreFrontPriceFactor (SFPF) which determines the split between Compound and liquidators. This would allow the protocol to lower VaR without increasing the liquidation penalty as much (or even at all)l.

This would end up negatively affecting the protocol reserve growth over time, so there are real tradeoffs here. We have not suggested any changes to this parameter yet, but if people are worried about the liquidation penalty becoming to high, we could investigate the options we have with SFPF.

We welcome community feedback here. We plan to go to proposal on-chain on 1/2/23 or as soon as we are able to incorporate any blocking feedback

We’d note that VaR here refers to the amount of collateral that has been absorbed by Comet but not purchased by liquidators. In other words, the VaR calculation refers to the value of absorbed collateral that is sitting on Comet’s balance sheet and is subject to pricing risk. This definition of VaR is slightly different from the definition of VaR for Compound V2 in order to align specifically with Comet’s new liquidation mechanism.

Gauntlet launched an insolvency refund for Compound that contains a portion of our payment stream that can be clawed back in the event of insolvencies due to market risk. Since our last recommendation there have been no new insolvencies in Compound, Gauntlet’s Insolvency Refund vault is still live and can be seen here 0x7667095Caa12b79fCa489ff6E2198Ca01fDAe057

Using WBTC as an example, in order for the protocol to incurr losses (bad debt, e.g. a decrease in reserves) through the liquidation process, the price of WBTC has to decline:

Currently, there is $67M of WBTC collateral spread across many users, who would get liquidated at different price points. The core question is whether the 5% incentive (split equally between the liquidator and reserves) is enough incentive to encourage liquidation. Simplified, we can say, “will a liquidator want WBTC, at a 2.5% discount to market price, before WBTC has fallen 23-39%”?

On-chain (and liquidators can use both on-chain and off-chain liquidity) there is massive liquidity for WBTC; DefiLlama’s liquidity tool currently indicates that $10M of WBTC can be instantly liquidated with ~1% slippage. Would a liquidator be willing to accept WBTC, at a 2.5% discount, knowing that it can instantly be sold at a 1% discount, in almost any size? Very likely. If they had probably hours for these stars to align (WBTC has to fall a long way before the protocol incurrs losses), would they be willing to accept a 2.5% discount? Far more likely.

I am concerned that this proposal is overly conservative, and comes at the cost of user experience, when the protocol is still in its infancy and hasn’t scaled yet. As a community, I think we should be taking steps with the parameters and incentives to encourage the migration of assets to the newer protocol.

I agree with Robert on this point. I’m also curious what Chaos Labs thinks, if anything.

Thanks, @rleshner, for your feedback to help move community discussion forward. We agree there are important tradeoffs for the community. From a risk management perspective, we aim to provide the community with more information on the risk side. Our simulations show a meaningful reduction in Value at Risk (VaR) from these parameter changes.

To clarify, higher liquidation bonus does not always reduce risk, because a bonus that is too high can push accounts closer to liquidation as well as increase the chances of liquidation cascades in certain tail events. As a result, we do not always recommend increasing liquidation bonus. Below is an example of simulation results that we conducted in our original Compound research. After the liquidation bonus reaches a certain point (around 5% in this specific example), the likelihood of insolvency (bad debt) increases (of course, for V3, it is not entirely apples-to-apples). 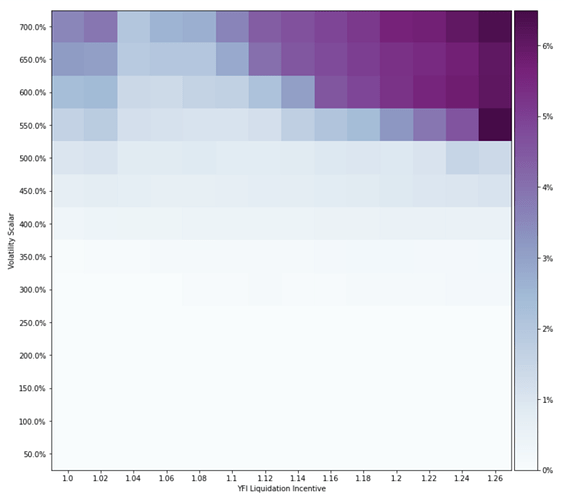 On-chain (and liquidators can use both on-chain and off-chain liquidity) there is massive liquidity for WBTC; DefiLlama’s liquidity tool currently indicates that $10M of WBTC can be instantly liquidated with ~1% slippage.

Thanks for providing this data here. For context, we do not measure slippage in a static way (we do not only consider current liquidity levels). This is because our simulations aim to measure risk in market stress periods (which can happen rapidly, as we have seen during Black Thursday). In tail market events, liquidity conditions can change dramatically. For example, in stress periods, there would be massive liquidations in the whole DeFi ecosystem, and liquidity can evaporate rapidly. Our model takes a more conservative assumption in case of such liquidity squeezes, and the Dashboard provides transparency for the results of the simulation under different volatility settings.

Given the risks of WBTC insolvency (making up a significant portion of VaR), we could either adjust liquidation penalty, liquidation threshold, or storefront price factor to reduce VaR.

Of course, there are strategic considerations here as well. For example, the community may decide to heavily focus on migration to v3 to shrink the size of v2 and thus de-risk v2 (which may certainly be a practical strategy). There are always revenue/risk considerations, and we hope that the above provides some perspective on the risk side. As always, we would appreciate the community’s feedback here as they consider the tradeoffs.

Paul’s explanation makes sense to me. Just a quick question about the Net Insolvent Value in the original post:

volatility scalar means the volatility of the underlying asset. I suppose the iv of BTC can be a good alternative indicator. Current iv is about 40-50%, then at 500% vol scalar the iv is 200-250%. We have seen during extreme market conditions iv does not exceed 500%, which corresponds to a vol scalar of around 1000%. If that’s the case, then it rarely makes sense to consider those areas above the line vol scalar=1000%. We can see that even if the market explodes the current liquidation factor should be fine.

In case you define vol scalar in a different way (instead of defining it based on iv), would you mind share your methodology for it?

To clarify, higher liquidation bonus does not always reduce risk, because a bonus that is too high can push accounts closer to liquidation as well as increase the chances of liquidation cascades in certain tail events.

@pauljlei, thanks for highlighting the above. However, this dynamic - a bonus that is too high can push accounts closer to liquidation - is not quite intuitive from a cause and effect perspective. I looked through the document you linked (Compound Market Risk Assessment) and the only explanation it provides is the following:

“If the liquidation incentive is too high, a borrower may be unwilling to borrow assets from Compound in the first place, or she may open a borrowing position and maintain a high collateral factor.”

Is the above user behavior an assumption of the Agent Based Simulations, or has it been observed in the real world? Unwillingness to open borrow positions is understandable when confronted with high liquidation incentive. However, the tendency to maintain a high collateral factor (if people indeed behave that way) is not intuitive. Is there a rational explanation for it?

I agree with RogerS’s concern. My concern about volatility also coincides with a point in his previous posts (Compound DAO vendor management capability & Gauntlet - #5 by pauljlei).